The first Juneteenth in Phoenix Arizona was celebrated in 1911. One of the attendees at that celebration was Booker T. Washington. This event was held for several years before hard economic changes took over along with the death of a minister who helped to facilitate. This caused the tradition to be put on hold and eventually die out.
Several years later, a lady by the name of Vernell Coleman started Juneteenth up again over at a school by the name of Dunbar. Eventually, the gathering was moved to Eastlake Park where the very first event was held. 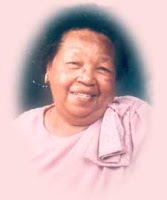 Ms. Coleman was born August 28,1918 in Henderson Texas to Robert and Berta McLemore Myers.
As a Texan, she knew about the 19th of June and the significance of why it was so important for blacks who finally heard that they were granted their freedom after years of being slaves. The Emancipation Proclamation drafted on September 22,1862 was to take affect January 1st 1863. A Union General by the name of Gordon Granger and his troops did not give the news to slaves in Texas until they reached Galveston on June 19th 1865.

Ms Myers-Coleman's mission and goal was to bring that celebration back to the fore-front. And that she did!
The crowds began to grow and grow into the thousands. Booths were set up and people could sell food, companies/venues would have a booth for causes like health care, child welfare, domestic violence help, voter registration drives or anything else involving the community.

There were marches,parades,talent shows basketball tournaments and the awarding of Scholarship's to deserving students. Other awards were presented to those in the community who contributed their time working with youth or the elderly through-out the year. One was the Spirit Award of which I am very proud of. 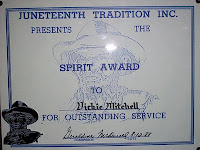 Ms Coleman was later honored for her many years of work not only for Juneteenth but for being a tireless leader in civil rights. I am proud to have known her and several members of her family. In fact her mother Ms Bryant was one of my lifelines in taking care of my daughter Latisha and Nephew Anthony when they were toddlers.

Ms Coleman, an inductee into the Arizona Women's Hall Of Fame passed away March 27, 1990 leaving a legacy all Arizonans should be proud of.
Geraldine McDonald, another warrior took over the helm as did others in the ensuing years.
Posted by Ms Vicky at 11:11 PM

Vicky,
This is a great story! I love hearing how various communities embrace the spirit of Juneteeth an fully understand our need to celebrate who we are and what we have endured and overcome!
-Angela-

Thanks Angela! If you noticed Spirit Award I received, your cousin Geraldine McDonald sighed it. Small World after all.

Thank you Sandra,and many thanks for reading it.

I'm a little late, just catching up on things. Thanks for sharing your post.

no problemo! I appreciate ya looking.

Vicky, thanks so much for enlightening us on this important part of our Arizona Black Heritage. You know we all think we know a lot about our Arizona Black History - but you do the nuts and bolts, you document when others speculate - and I really appreciate you. Please don't stop.

Thanks Ms Vicky. Thanks for enlightening us on this important part of our Arizona Black Heritage. You know we all think we know a lot about Arizona Black History, but you do the heavy lifting, you document when others speculate. An then you play it out so we all can understand. I (we) appreciate you very much!

Thank you so much Rod!!!