Gently On The Tree: Zepher's and Zephyr's

The Texas Zephyr was a train that ran the Denver to Ft Worth Route. (Museum of the American Railroad in Dallas Texas) I was talking with an AfriGeneas chatter friend Seventies Soulchild who is travelling to Mississippi for a reunion and to do some research. My thoughts went back to the day I found anotherZepher to add to my tree. 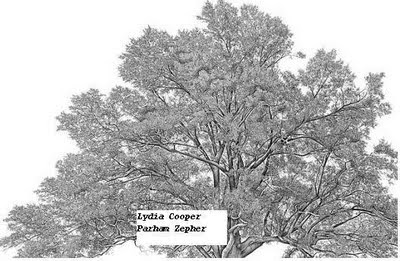 One summer in the late seventies, I went to Dallas Texas to visit my brother Richard. I had the chance to get in touch with my uncle Harry who came to the house, picked me up and took me back to his house to spend the day.

I loved talking to Uncle Harry because he always filled me in on family goings on. I did not grow up around my paternal family but always had the thirst for knowledge about the who, what, when where and whys.

Uncle Harry had this booklet that someone had given him that detailed the story of a celebration at the Fanthrop Inn. The name of the booklet was Fanthrop Days. I wish I had made a copy to take home with me. Years later after Uncle Harry passed away I inquired but no one seemed to know where it was or had ever recalled seeing it.
Henry Fanthrop was the proprietor of the Inn which was also a stagecoach stop for weary travellers and is now an historical site in Grimes County Texas. 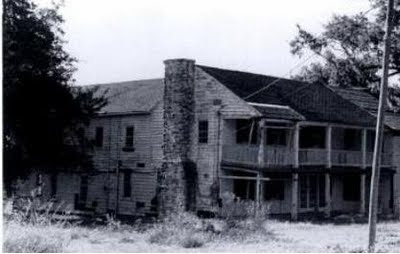 Uncle Harry believed that Fanthrop should have been the name that we may have carried because of the association with the Inn. After all he said, it was in the days of slavery. He told me that his great grandfather used to take care of and doctor on the horses.
I automatically thought he was talking about James "Jake" Daviss because he ended up becoming a doctor after attending Meharry in 1891.

Many years later did it hit home who he was referring to.

While Uncle Harry was talking he told me that there another child who was sold off in Mississippi and that after freedom his great grandfather had a chance to go get her and bring her home to Grimes County. Uncle Harry mentioned also that this daughter had fell for this man from Mississippi, married and went back with him to his home state, but eventually came back to Grimes County Texas with their children.
Here I go with my assuming self that we were still talking the Daviss line so I looked and looked and looked for this estranged Daviss sister to no avail.

One night while I was searching the Texas Death Records one by one for Grimes County I ran across this name. I smiled rather melancholy because it was my mothers first name. My mother was named Zepher and she was just that,a cool gentle breeze and My heart of hearts. 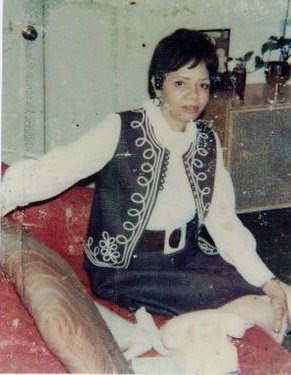 As I clicked on the link and started to read,the name that caught my eye was
J.P. Daviss, Navasota Texas, my grandfather!! He was the informant on this death certificate.

My first thought was that since he was a minister he was perhaps helping someone with the heartbreaking chore of filling out the form. 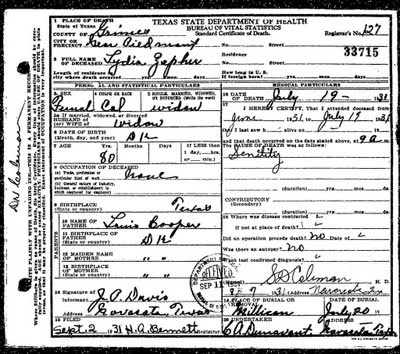 Uncle Harry was right, there was another daughter. This daughter was not a Daviss but a Cooper. Louis Cooper was the father of Sallie White Cooper Conway my Uncle Harry's grandmother and his great great grandfather.

This is a picture of Sallie Conway and her husband James Conway in Navasota. I always chuckle when I see this picture because those yard birds look like they don't have a care in the world or either they figure there was no use in running when someone came near them.

Her birth date was 1851 according to the Death Certificate. So Uncle Harry was right again about her being born in slavery.

Lydia was buried in Millican Texas in Brazos County so I went searching for her and her Mississippi Husband.

Bingo there was Isham and Liddy in the 1900 census. They were married March 24,1892 in Bryan Texas.
(To get a bigger view and browse the entire page click on census) 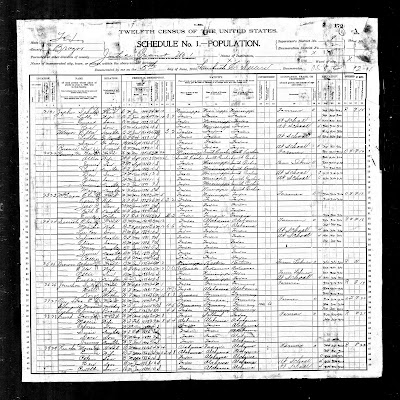 Here they are again still living in Brazos County in 1910 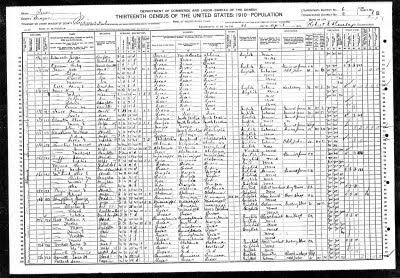 This 1930 census tells me that hubby Isham is still alive when the enumerator came around but on her Death Certificate she is a widow. I am looking desperately for his record. 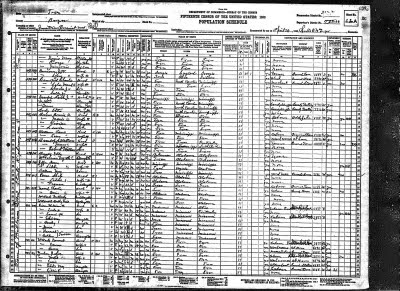 I am not sure if her nephew, my grandfather, went and got her to live out her days with him and my grandmother Gertrude Sims Daviss. The address on the certificate said near Piedmont and that was where my grandparents lived. I do know now that the puzzle was solved about the oral history that was told to me.

The only puzzle now was why the death certificate had a blank for the mother. My next chore was to find Lydia.link her to Mary White Cooper, Louis's Cooper's wife and my 2nd great grandmother.

I have only been able to find Mary Cooper in the 1880 census so I went back to study it over again. Several doors down is a Lydia age 27 married to a Parham. I found an index where Robert and Liddy Cooper were married on August 30,1875. (I also found an indication that Robert had also married again after several years so it was not through death.) so I am sure this Lydia is the same person who is on the death certificate and also the same person who married Isham Zepher.

You never know how oral history plays in your plans and what route it will have you go. Its a good thing I eventually went down the right road after playing the assumption game in my head. I don't want to say that Uncle Harry wasn't clear because he could have told me the right great grand in the first place. From now on I need to carry a good pen,listen with a good ear and ask the right questions.