Not my Zepher but it sure got me to thinking about the movie The Help:

I could have been considered a part of The Help for about one week-end in my lifetime. I had been looking and looking for a job to no avail. I was desperate to find anything.
I answered an ad in the paper and interviewed for a domestic helper and got the job. I worked that Saturday morning cleaning up this lady's house when it dawned on me to listen to my inner thoughts.

I never went back.

Not that I was too proud to do that type of work but this lady's daughter who was about my age or a year or two older dropped something on the floor that she did not make an attempt to pick up and I was NOT about to go down that road.
To this day I can't remember if I got my couple dollars pay.

I see all of these little similarities so I decided to find out more about Ms Zephyr Wright doing a little research.

Zephyr Wright was born in Marshall but was raised by her grandparents Tom and Maria/Mariah McKenzie until she was around twelve years old. This 1920 census puts her in the grandparents home listed as grand-daughter last name Blackmon or Blackman.

This is the bottom two lines of the 1920 census that shows the grandparents:

The 2nd page is continued here: Click on image to get a better look 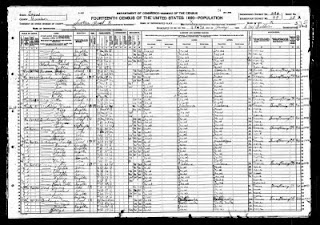 I still have not determined who Zephyr's mother is but this is the family in the 1910 census. 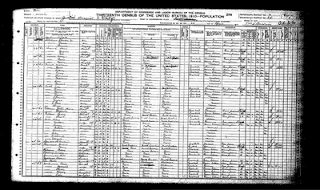 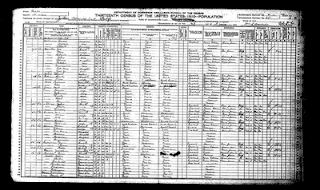 While a student at Wiley College in Marshall Texas, Zephyr was given the opportunity to work as a housekeeper and cook for Lady Bird Johnson.
Dr. Dogan the president of Wiley recommended her after Claudia let it be known that she was looking for someone to work for her.
Ms Wright knew of the Taylor's plus her aunt worked for Thomas Jefferson Taylor Claudia's father.

I am not totally sure when Ms Wright went from Housekeeper to the lone family cook but she must have been a wonderful one. Her recipe's for the White House menu's have been in various newspapers and magazines. The Johnson's did however leave the fancy cooking to a White House Chef they attained for all those State Dinner affairs. 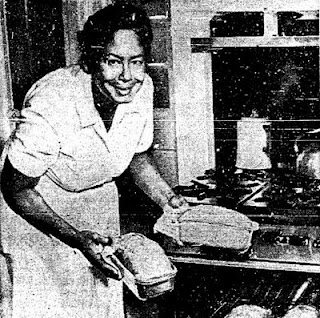 The Johnson girls threw a surprise birthday party for Zephyr. Growing up with a person through-out one's life is cause for deep affection. 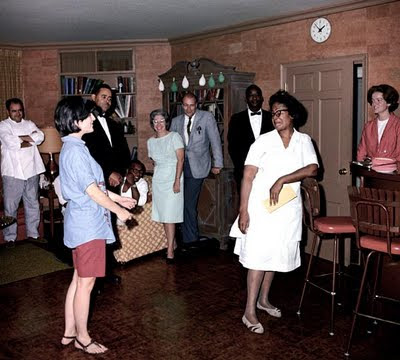 Perhaps Zephyr knew Susan Bass Clardy when they both attended the wedding of Lynda Bird Johnson and Captain Charles Robb.

Ms Clardy is one of the links to Ms Angela Walton Raji.
see: http://myancestorsname.blogspot.com/ as Angela tells her story of those in her family who was The Help.

Ms Wright had much influence on Lyndon Baines Johnson. So much so that he used her knowledge when making a point to leaders of great distinction. (Rockford Register) 1966 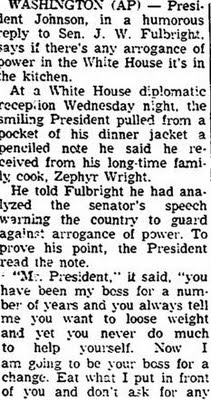 Excerpts from Leonard H. Marks, director of the U.S. Information Agency during the Johnson administration.
He tells this story about how she may have influenced his work on civil rights reform.


"Many say that Lyndon, because he came from the South, didn't believe in civil rights. Lady Bird had two people as hired help, Zephyr and Sammy Wright. Zephyr was the maid and cook, and Sammy was the chauffeur.

At one of the luncheons I attended before Johnson became president, Zephyr was serving when Lyndon told her that she and Sammy should get ready to drive to Austin. The family would join them later.
She said, "Senator, I'm not going to do it." There was silence.

She said, "When Sammy and I drive to Texas and I have to go to the bathroom, like Lady Bird or the girls, I am not allowed to go to the bathroom. I have to find a bush and squat.
When it comes time to eat, we can't go into restaurants. We have to eat out of a brown bag.
And at night, Sammy sleeps in the front of the car with the steering wheel around his neck, while I sleep in the back. We are not going to do it again."

LBJ put down his napkin and walked out of the room.

Later, when Johnson became president and signed the Civil Rights Act of 1964 into law Zephyr was there. Johnson motioned to her, gave her the pen that he used to sign the bill.
He said, "You deserve this more than anybody else." 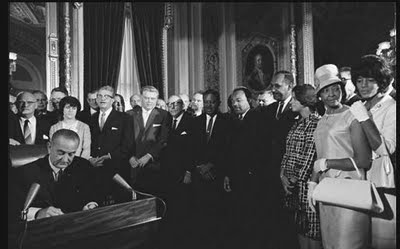 Ms Wright passed away April 25th 1988 in Washington DC.
According to the Washington Post April 28th article Her husband, Sammie Wright, died in 1969. The post listed survivors that included two half brothers, James and Willie Black, both of Fort WorthTexas and two half sisters, Mary Yancy of Houston and Virginia Clemons of Dallas.

RIP Ms Zephyr Wright, You were more than just the HELP, you were a friend to those you helped and loved.
Posted by Ms Vicky at 2:31 AM

Enjoyed the post. I knew nothing about this Zephyr, do now.

Hi Linda,thanks for the read and for the comment. She must have been quite the lady.

What a wonderful article! Zephyr Wright made a direct impact on President Johnson with her telling the story of life as it was for her. She made an impression, and she made an impact on Civil Rights.

I love your story telling ability Cuz :-). You make everything very relevant and historically correct!
Mariah is proud of you , but she is peeking around the corner.

thanks cuz for the lift up..Do you really think she is peeping (LOL)

Thank you for telling this piece of history. Great job!

Thanks Mavis, I appreciate your comments.

I love it! My daughter's name is Zephyr. So glad she has a strong, bold and brave woman who shares her name!

yes indeed, those three words are true to form and I love even the sound. Thanks for reading and commenting.

I was surprised at how much I liked this lovely film. I like that it doesn't spoon feed the audience by trying to explain everything, tie everything in a neat package, or try to manipulate you to feel a certain way about a character. All the acting is superb, but Laurie Metcalf is a stand out. I appreciate the script and directing - it isn't slick and overproduced, but it's also not choppy and confusing. it felt like it duplicated a teenager's sense of things.
movies2k
putlocker